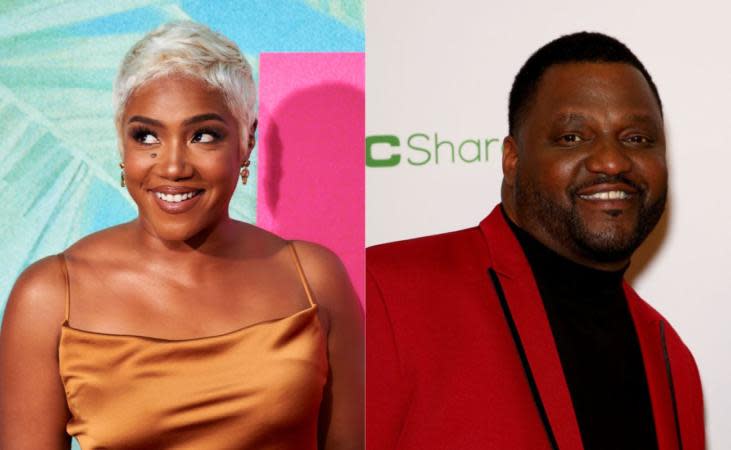 After weeks of silence, speculation, and aloof messages on social media, Tiffany Haddish has settled with the siblings who accused her and fellow comedian Aries Spears of grooming and harassment, Radar Online. The settlement also blocks the public from seeing the original complaint.

In case you missed it, Spears and Haddish were sued by two siblings who went by the pseudonyms Jane and John Doe, who allege that they were groomed and involved with several sexually suggestive skits with the comedians while they were minors aged 7 and 14. As a result, the siblings say they have suffered mental anguish.

According to the siblings, Haddish had been friends with their mother for a long time. She told their mother that she was going to take the siblings to auditions for Nickelodeon, but instead, they filmed several inappropriate skits.

One skit called “Through a Pedophile’s Eyes” featured a then-7-year-old John Doe. In the video, which was uploaded to Funny or Die and quickly removed, Spears plays a pedophile who takes sexual interest in Doe’s character. He’s shown “lusting” over the boy throughout the video, in one scene John Doe is shirtless in a bath tub. Haddish portrays the mother of Doe’s character’s in the skit. In another skit, Jane Doe says she was made to simulate sex with a sandwich.

Spears addressed the lawsuit and allegations while appearing on her podcast, “Spears & Steinberg.” He described the situation as “an extortion case” and “a shakedown.” Spears also expressed fear that it would ruin his career, Madame Noire reports.

“I already felt like my career was over. Before all this. I thought I was blackballed and my shit was over, but I always said, I felt like I was one thing away from the turnaround, but now with this, I’m almost certain that Tombstone is written,” the chase star said.

Haddish was more hush hush about the matter. She shared an apology on Instagram, telling her millions of followers that the “sketch was intended to be comedic,” but “it wasn’t funny at all.”

The case, which was moved from state court to federal court by Haddish may have officially come to a close. According to Radar Online, Haddish has “worked out” a deal with the accusers. Though most details of that deal are unknown at this time, Haddish will need to issue a public apology for her participation in the skits. She may also need to “recant” some of the claims she made about the lawsuit being a shakedown.

Because John Doe is still a minor, all parties have agreed to keep the complaint sealed to protect his identity.

“The full public availability of the Complaint could permit public identification of Plaintiff John Doe and, by association, Plaintiff Jane Doe,” the filing read.

In court docs obtained by TMZ, it appears that Jane Doe has now asked a judge to dismiss the suit.

“My family and I have known Tiffany Haddish for many years – and we now know that she would never harm me or my brother or help anyone else do anything that could harm us. We wish Tiffany the best and are glad that we can all put this behind us,” said Jane Doe, according to TMZ.

Because the suit was dismissed without prejudice, that means it cannot be refiled.