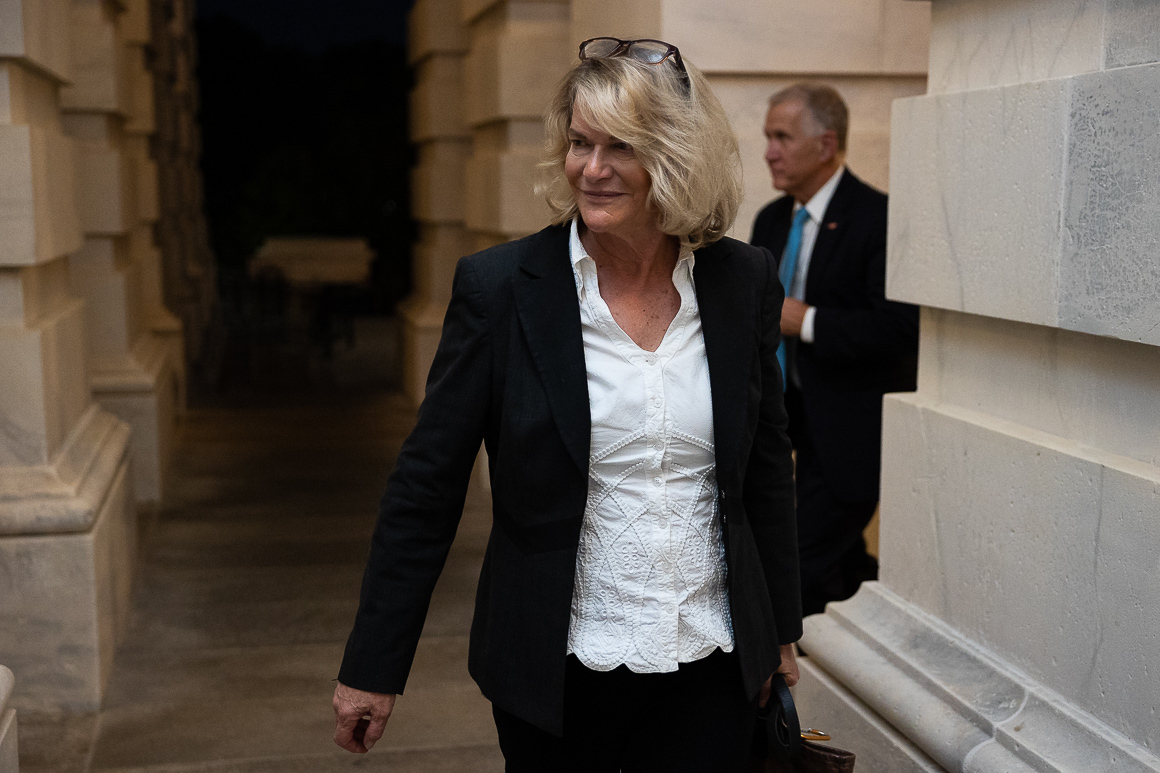 As the prospects for coal continue to darken, states that were once the lifeblood of America’s coal mining industry are now tying their economies to the production of a new type of mining: cryptocurrency. And lawmakers on Capitol Hill are moving to facilitate the trend.

Wyoming, the nation’s leading coal mining state, was the first state to establish cryptocurrency banking in 2019. Texas, the largest coal power consumer, has seen a large influx of crypto mining businesses, and the CEO of the state’s largest grid operator says he’s “ pro-Bitcoin.”

And in Kentucky, Democratic Gov. Andy Beshear last year signed a law qualifying crypto mining for an alternative energy tax credit, with the stated intent for Kentucky “to become a national leader in emerging industries which use substantial amounts of energy.”

The action in the states is now getting wider attention in Washington. Democrats are looking to keep tabs on the industry. Many Republicans have shed their suspicions and are now full-fledged supporters.

Sen. Cynthia Lummis (R-Wyo.) is expected to introduce a bill later this year taking a free-market approach to cryptocurrency regulation. And Rep. William Timmons (RS.C.) is touting a new crypto data center in his district that claims it will be 100 percent carbon neutral.

“Anyone who says all crypto mining is bad for the environment does not know what they are talking about,” Timmons said in a statement to E&E News.

The energy-intensive computing process required to make bitcoins, known as “proof-of-work” mining, has come under fire from some activists and Democratic lawmakers over concerns that the added power demand could worsen the effects of climate change. But supporters on and off Capitol Hill say they have a positive vision for cryptocurrency and the environment.

Indeed, they argue digital mining could improve electric grids and help more affordably transition rural utility systems to renewable energy, because companies that mine for cryptocurrency want to cut their emissions and want to help utilities build renewable power infrastructure.

“There’s no question that if you’re a coal state and you’ve got coal, you want to sell coal, full stop. But you’re also looking to the future,” Kevin Batteh, strategic adviser for the Chamber of Digital Commerce, told E&E News in an interview last week.

“They’re saying, ‘Hey, we’ve already lost a lot of our coal energy business, and we’re going to continue to lose more of it; what’s our next play?’” he said.

Critics have grown concerned that cryptocurrency is becoming politically tied to the fossil fuel industry. A recent House Energy and Commerce subcommittee hearing on the environmental impacts of cryptocurrency mining became at many points a platform for industry representatives to reiterate pledges to produce their product with renewable energy (E&E Daily, Jan. 21).

“I support a just transition for communities in coal country to ensure they have a secure place in the clean energy economy,” Warren said in a statement to E&E News.

But, she continued, “the data shows that cryptomining can have harmful impacts on local residents, including higher electricity costs, increased pollution, and weaker energy grids. Lawmakers have a responsibility to ensure that cryptomining does not harm vulnerable communities and exacerbate the climate crisis.”

Mira Hurley, an advocate for sustainable cryptocurrencies, is working to change the conversation.

“I think crypto has a terrible reputation when it comes to environmental impact, and that really quite saddens me,” she said. “If those people all think crypto is a massive polluter and because of that they are anti-crypto, that’s definitely bad for crypto.”

Lummis sees another similarity between coal and crypto miners: They have both “been the target of a lot of ire from people who simply do not understand their industry.”

“The coal mining communities across Wyoming are some of the most resilient groups of people I’ve ever met,” she said in a statement to E&E News. “They have withstood the boom-and-bust cycles for decades, yet continued to show up time after time to make sure the lights could stay on around the nation.”

She added, “I think the digital asset community will face similar challenges along the way.”

Not long ago, Republicans were sharpening pitchforks toward regulating these digital currencies. When the price of Bitcoin first spiked in 2017, even GOP firebrands like former Rep. Dave Brat of Virginia called for fierce regulation of cryptocurrency for fear it could “destabilize the whole economy.”

At the Energy and Commerce hearing last month, Oversight and Investigations Subcommittee ranking member Morgan Griffith (R-Va.) prodded expert witnesses on whether land in his district once used for coal mining could be repurposed into homes for mining bitcoins.

“We have a real asset in southwest Virginia,” Griffith said. “We always hear from my colleagues about reducing coal and so forth. We’re trying to repurpose our industry — in many of my counties a No. 1 industry.”

He touted his hometown’s “deep underground” areas where “water is 50 degrees [and] air temperature is in the 50s … an attractive natural coolant for large, hot computers for data centers and mining of cryptocurrency.”

Rep. David McKinley (RW.Va.), the ranking member of the Energy and Commerce Subcommittee on Environment and Climate Change, defended cryptocurrency miners against potential regulations that would force companies to rely on renewable energy for powering their mining rigs.

McKinley called those sorts of proposals “discriminatory” and compared them to “redlining” — a term typically used to describe racially motivated housing discrimination.

“[Companies are] being advised to use green energy, to depend on renewables only. … Doing that would redline fossil rich-dependent states like West Virginia and elsewhere,” McKinley said. “We’re picking winners and losers.”

In many cases, GOP lawmakers are quick to exploit the potential clean energy benefits from cryptocurrency.

For example, Timmons, the South Carolina Republican, is celebrating a crypto rising star: Greenidge Generation Holdings, which is setting up a data center in his district and claims it will be 100 percent carbon neutral thanks to South Carolina’s ample supply of nuclear power.

I have conceded that while Bitcoin “uses a fairly energy-intensive type of mining … there are other ways to mine that require much less energy.”

The South Carolina facility is Greenidge’s second crypto data center. In Dresden, NY, the company renovated a former coal plant and converted it to natural gas. EPA last month rejected a request from Greenidge to stall closure of a coal ash pond at the Dresden plant.

Democrats are insisting that environmental safeguards in cryptocurrency mining must be implemented. At the recent House subcommittee hearing, Democrats repeatedly questioned the reliability of the industry’s current model for fueling production with renewable energy sources.

And while Warren has been leading the charge against cryptocurrency polluters from her seat on the Senate Banking Committee, Sen. Kirsten Gillibrand (DN.Y.) has separately been beating the drum for stronger EPA oversight of Greenidge’s Dresden location.

“The EPA should exercise its oversight powers under the Clean Air Act to evaluate the permit renewals of Bitcoin mining operations, taking into account the potential consequences of these operations on local emissions and air quality,” Gillibrand said in a statement. “The recent volatility in the price of Bitcoin demonstrates that a high degree of uncertainty remains when evaluating Bitcoin’s economic impacts.”

The Dems who back crypto

Even Democrats who count themselves among the most staunch supporters of the cryptocurrency industry in Congress could end up siding with environmentalists if and when lawmakers are faced with legislating on the issue.

Rep. Darren Soto (D-Fla.), a co-chair of the bipartisan Congressional Blockchain Caucus who accepts campaign donations via cryptocurrency, doesn’t see his support for the industry at odds with his environmental ethics. He has spent the last year touting a signature House Democratic proposal to put the United States on the path to achieving net-zero greenhouse gas emissions by 2050.

And fellow Blockchain Caucus Rep. Ro Khanna (D-Calif.), a staunch progressive who was a co-chair of the 2020 presidential campaign of Sen. Bernie Sanders (I-Vt.), was as far back as 2018 tweeting in support of “tax[ing] the energy consumption from [cryptocurrency] mining to avoid an energy crisis.”

Last Spring, Khanna suggested the cryptocurrency mining boom could actually “lead to massive investments in clean energy” as more companies are incentivized to pursue it.

But Lummis, who is working diligently to grow cryptocurrency business in her traditional coal state, shrugged off environmental concerns.

“Everything we do comes with its own set of environmental hazards,” Lummis said in her statement. “Wind energy does, solar energy does, nuclear energy does. But … our market-based system incentivizes companies to keep striving for cleaner ways to use the resources we have. Digital asset miners are some of the most innovative people.”

She continued, “I have no doubt that they are going to find ways to use the resources they have in the most clean and efficient way possible.”